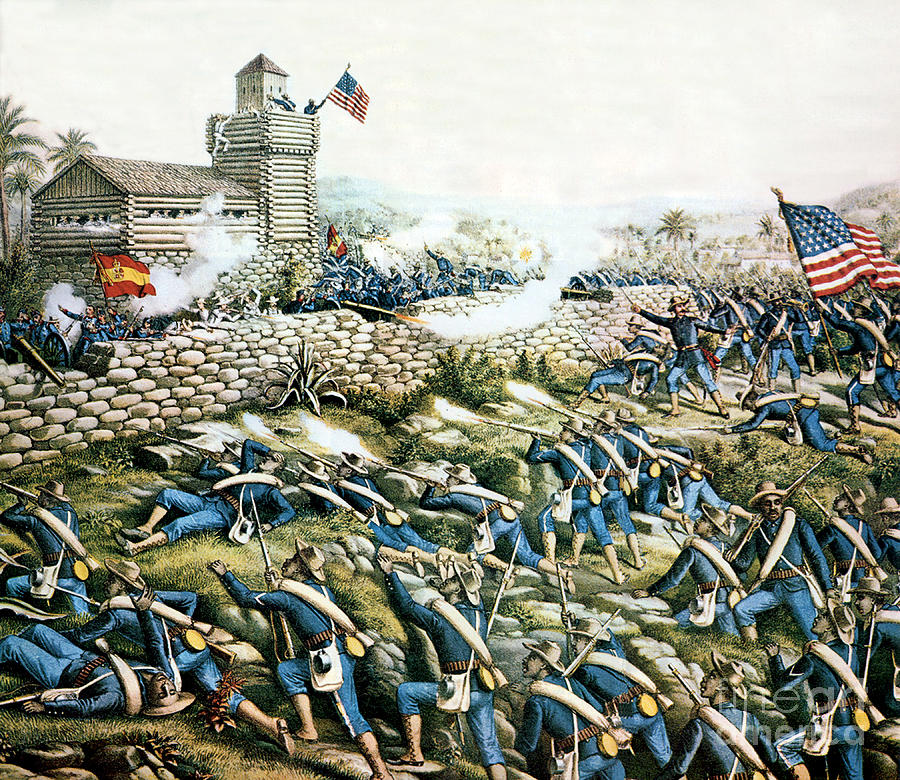 Entitled "Charge of the 24th and 25th Colored Infantry depicting the Battle of San Juan Hill." The 24th Infantry Regiment was a unit of the United States Army, active from 1869 until 1951, and again from 1995 until 2006. The 25th Infantry Regiment was one of the racially segregated units of the United States Army known as Buffalo Soldiers. The Battle of San Juan Hill (July 1, 1898), also known as the battle for the San Juan Heights, was a decisive battle of the Spanish-American War. The San Juan heights was a north-south running elevation about two kilometers east of Santiago de Cuba, Cuba. The names San Juan Hill and Kettle Hill were given to the location by the Americans. This fight for the heights was the bloodiest and most famous battle of the war. It was also the location of the greatest victory for the Rough Riders, as claimed by the press and its new commander, the future vice-president and later president, Theodore Roosevelt. The American press at the time overlooked the fact that the Buffalo Soldiers of the 10th Cavalry and 24th Infantry Regiments had actually done much of the heaviest fighting. The Spanish-American War was a conflict in 1898 between Spain and the United States, the result of US intervention in the Cuban War of Independence. In the late 1890s, US public opinion was agitated by anti-Spanish propaganda led by journalists Joseph Pulitzer and William Hearst which used yellow journalism to criticize Spanish administration of Cuba. After the mysterious sinking of the US Navy battleship Maine in Havana harbor, political pressures from the Democratic Party pushed the administration of Republican President William McKinley into a war he had wished to avoid. Although the main issue was Cuban independence, the ten week war was fought in both the Caribbean and the Pacific. US naval power proved decisive, allowing expeditionary forces to disembark in Cuba against a Spanish garrison already brought to its knees by nationwide Cuban insurgent attacks and