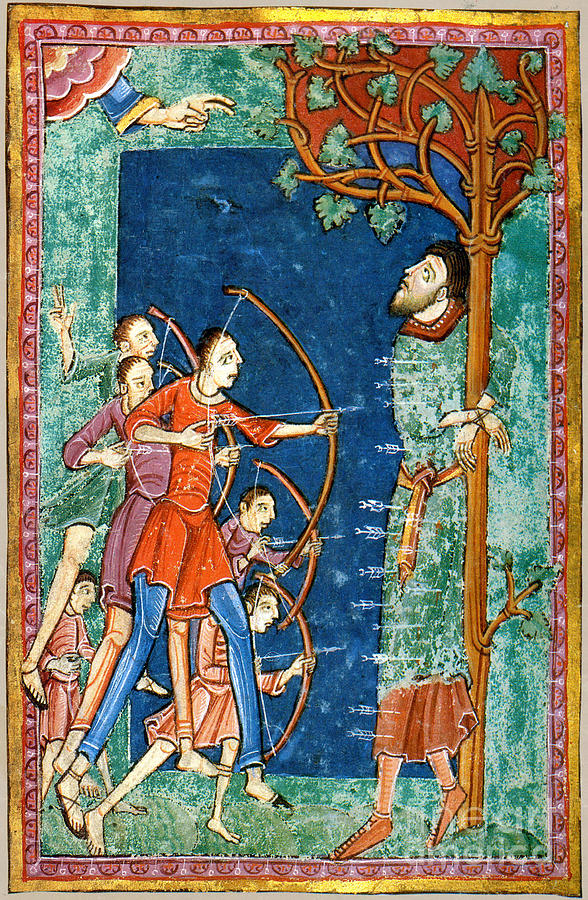 Captioned "After binding King Edmund to an oak tree, Viking archers let fly their arrows, piercing the defeated English Monarch with their shafts until he resembled, as a church chronicler later wrote a sea 'urchin whose skin is closely set with quills'." Illuminated manuscript, "Life of Edmund", unknown artist, circa 1130. Edmund the Martyr (841 - November 20, 869) was king of East Anglia, an independent Anglo-Saxon kingdom that comprised what are now the English counties of Norfolk and Suffolk, from about 855 until his death. Almost nothing is known of Edmund. He is thought to be of East Anglian origin and was first mentioned in an annal of the Anglo-Saxon Chronicle, written some years after his death. The kingdom of East Anglia was devastated by the Vikings, who destroyed any contemporary evidence of his reign. In 869, the Great Heathen Army advanced on East Anglia and killed Edmund. He may have been slain by the Danes in battle, but by tradition he met his death at an unidentified place known as Haegelisdun, after he refused the Danes' demand that he renounce Christ. The Danes beat him, shot him with arrows and then beheaded him. During the Middle Ages, he was regarded as the patron saint of England, Edmund is the patron saint of pandemics.