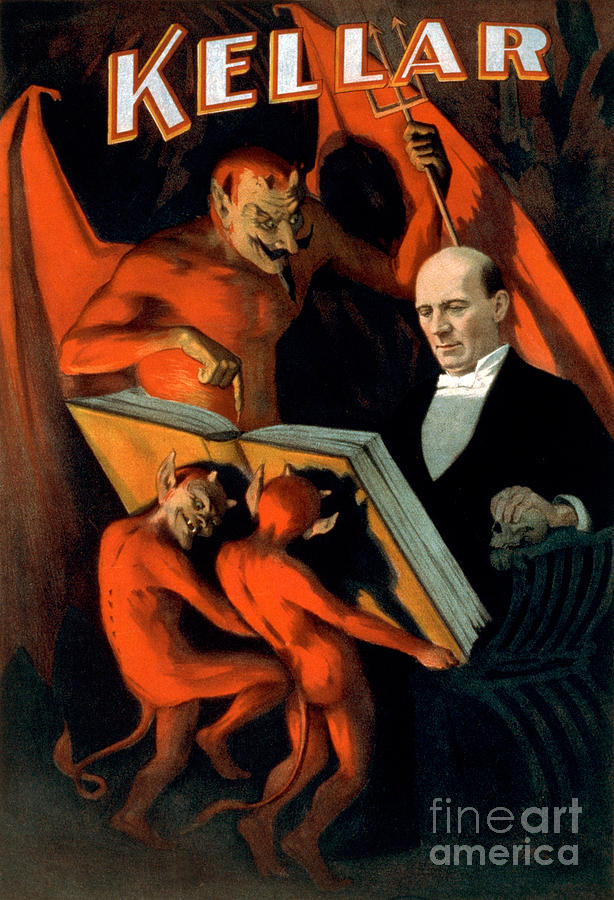 Kellar lithograph poster created by the Strobridge Lithographing Company, 1894. Magic has a long history of being associated with the devil and the dark arts. The explosion of devilish advertisements took place when magicians moved from using simple printed playbills to elaborate full color lithographs. Harry Kellar (July 11, 1849 - March 10, 1922) was an American magician who presented large stage shows during the late 19th and early 20th centuries. He was often referred to as the "Dean of American Magicians" and performed extensively on five continents. One of his most memorable stage illusions was the levitation of a girl advertised as the "Levitation of Princess Karnack". He married Eva Lydia Medley, a coronet player, in 1887. She played a part in many of his upcoming illusions, but she also provided music for the shows. He retired in 1908, and allowed Howard Thurston to be his successor. Kellar was often visited by other magicians, notably including Harry Houdini. Houdini put together a show for the Society of American Magicians to benefit the families of those who died in the sinking of the USS Antilles by a German U-boat and got Kellar to come out of retirement to perform one more show. The show took place on the largest stage at the time, the Hippodrome. After Kellar's performance, he started to leave, but Houdini stopped him, saying that "America's greatest magician should be carried off in triumph after his final public performance." The members of the Society of American Magicians helped him into the seat of a sedan chair, and lifted it up. The 125 piece Hippodrome orchestra played "Auld Lang Syne" while he was slowly taken away. He died in 1922 at the age of 72 from a pulmonary hemorrhage brought on by influenza.