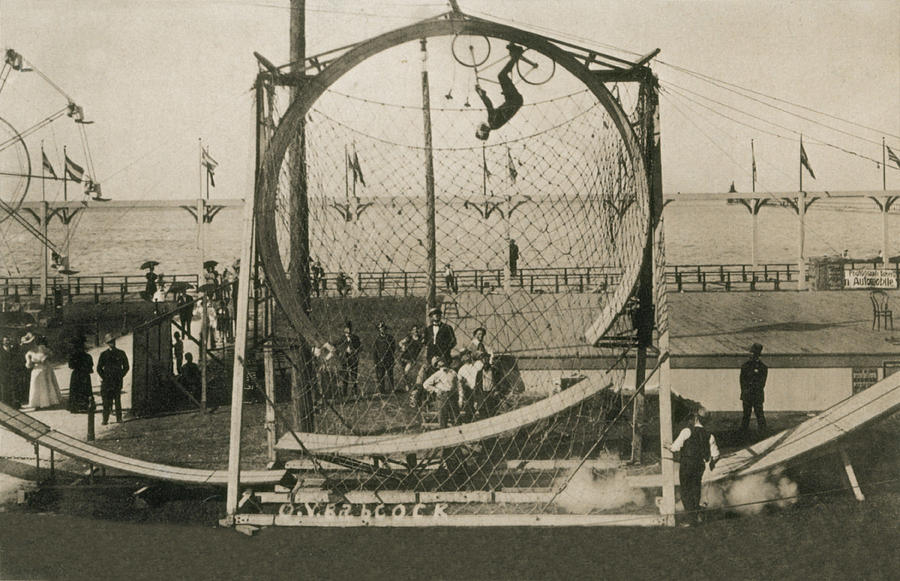 Entitled "O.V. Babcock. Looping death trap loop. Ontario Beach Park, N.Y." Known as the "Coney Island of western New York," Charlotte's Ontario Beach Park was a popular amusement area in the late 19th and early 20th centuries. The loop the loop stunt was created by a bicycle daredevil who went by the name Allo Diavolo. To perform the loop the loop stunt a rider would ride a bicycle around a large wooden loop to loop apparatus. Some would perform the loop on roller skates and even in a car. From the top; a short arc, to ease the downward momentum for the climb, long, gradual rise, so designed to minimize the outward pressure greatest in this arc, half circle, made small so that the wheel may get past the apex with the least possible expenditure of force, wide downward art giving the least possible momentum on leaving the loop, gentle slope to the ground. According to a New York Times article on April 2, 1902, Diavolo's spiral ellipse was 26 feet high and 18 feet wide. The ramp down to the spiral was 100 feet long, 3 feet wide, and had an angle of 45 degrees. The bicycle did not have pedals. No photographer credited, undated.