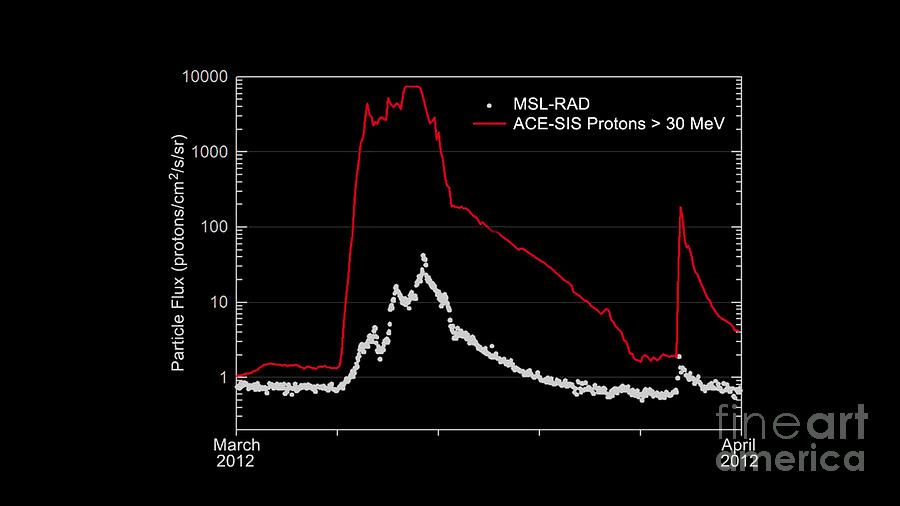 Graph Of Radiation Levels In Route

Graph Of Radiation Levels In Route

This graphic shows the flux of radiation detected by NASA's Mars Science Laboratory on the trip from Earth to Mars from December 2011 to July 2012. The spikes in radiation levels occurred in February, March and late May of 2012 because of large solar energetic particle events caused by giant flares on the sun. The data were obtained by the Radiation Assessment Detector on Curiosity. The radiation levels are measured in units of flux or particles per square centimeter per second per steradian. The MSL spacecraft structure (which includes the backshell and heatshield) provides significant shielding from the deep space radiation environment, reducing significantly the particle flux observed by the Radiation Assessment Detector. Zooming in on the solar energetic particle event in March, a red line shows the particle flux observed by the Solar Isotope Spectrometer instrument on NASA's Advanced Composition Explorer. ACE orbits the L1 libration point, which is a point of Earth-sun gravitational equilibrium about 930,000 miles (1.5 million kilometers) from Earth and 92.27 million miles (148.5 million kilometers) from the sun. In March, the ACE spacecraft was roughly aligned with MSL in terms of the path the solar particles took from the sun, thus providing a good estimate of the radiation levels outside of MSL's shielding. The measurements from the Solar Isotope Spectrometer are several orders of magnitude greater than those seen by MSL's Radiation Assessment Detector inside the capsule.