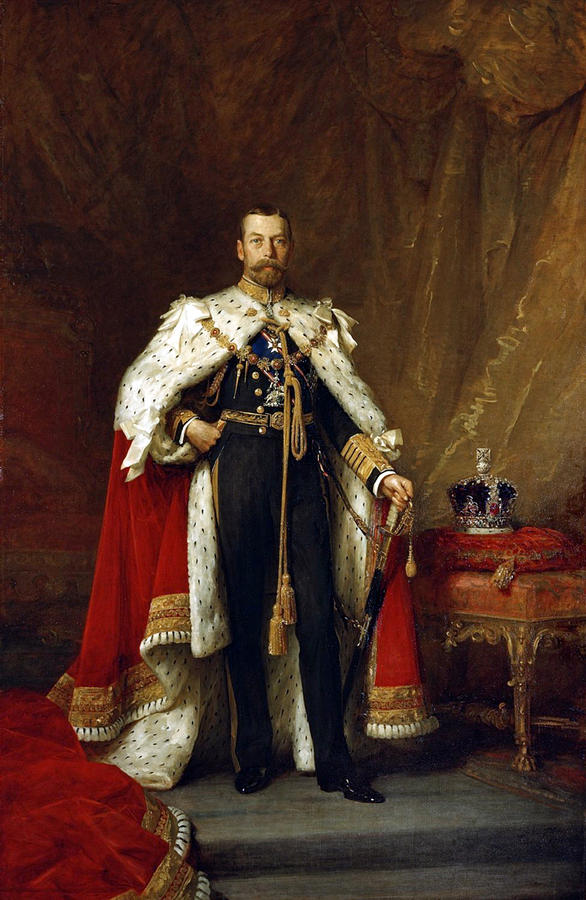 Coronation portrait by Sir Luke Fildes, 1911. George V (June 3, 1865 - January 20, 1936) was King of the United Kingdom and the British Dominions, and Emperor of India. He was a grandson of Queen Victoria and the first cousin of Tsar Nicholas II and Kaiser Wilhelm II. From 1877 to 1891, he served in the Royal Navy. On his father's death in 1910, he succeeded as King-Emperor of the British Empire. Public respect for the king increased during WWI, when he made many visits to the front line, hospitals, factories and dockyards. In 1917 anti-German feeling led him to adopt the family name of Windsor, replacing the Germanic Saxe-Coburg-Gotha. As a result of WWI, most other European empires fell while the British Empire expanded to its greatest effective extent. His reign saw the rise of socialism, communism, fascism, Irish republicanism, and the Indian independence movement, all of which radically changed the political landscape. He was plagued by illness throughout much of his later reign and died in 1936 at the age of 70.