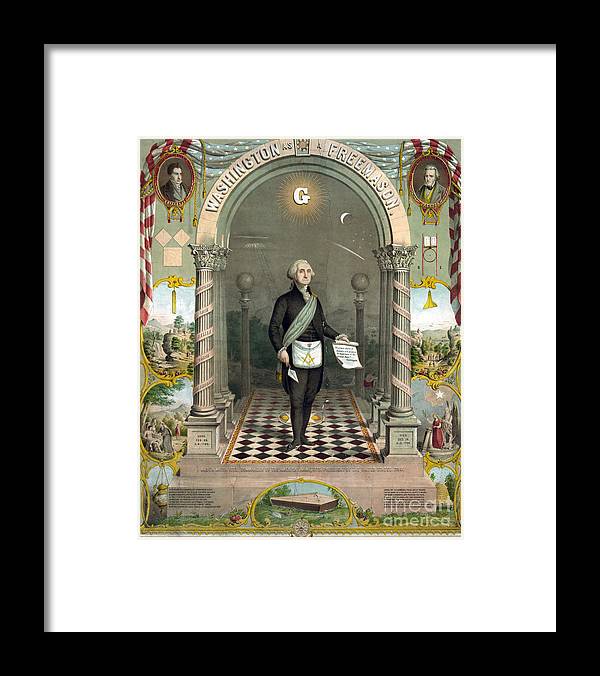 George Washington Freemason framed print by Photo Researchers.   Bring your print to life with hundreds of different frame and mat combinations. Our framed prints are assembled, packaged, and shipped by our expert framing staff and delivered "ready to hang" with pre-attached hanging wire, mounting hooks, and nails.

Washington in masonic attire, holding scroll, and trowel. Portraits of Lafayette and Jackson in corners. He joined the Masonic Lodge in... more

Washington in masonic attire, holding scroll, and trowel. Portraits of Lafayette and Jackson in corners. He joined the Masonic Lodge in Fredericksburg, Virginia at the age of 20 in 1752. At his first inauguration in 1791, President Washington took his oath of office on a Bible from St. John's Lodge in New York. In retirement, Washington became charter Master of the newly chartered Alexandria Lodge No. 22, sat for a portrait in his Masonic regalia, and in death, was buried with Masonic honors. George Washington (February 22, 1732 - December 14, 1799) was the first President of the United States of America, serving from 1789 to 1797, and dominant military and political leader of the United States from 1775 to 1799. He led the American victory over Great Britain in the American Revolutionary War as commander-in-chief of the Continental Army from 1775 to 1783. He was one of the Founding Fathers of the United States. He presided over the convention that drafted the United States Constitutio...