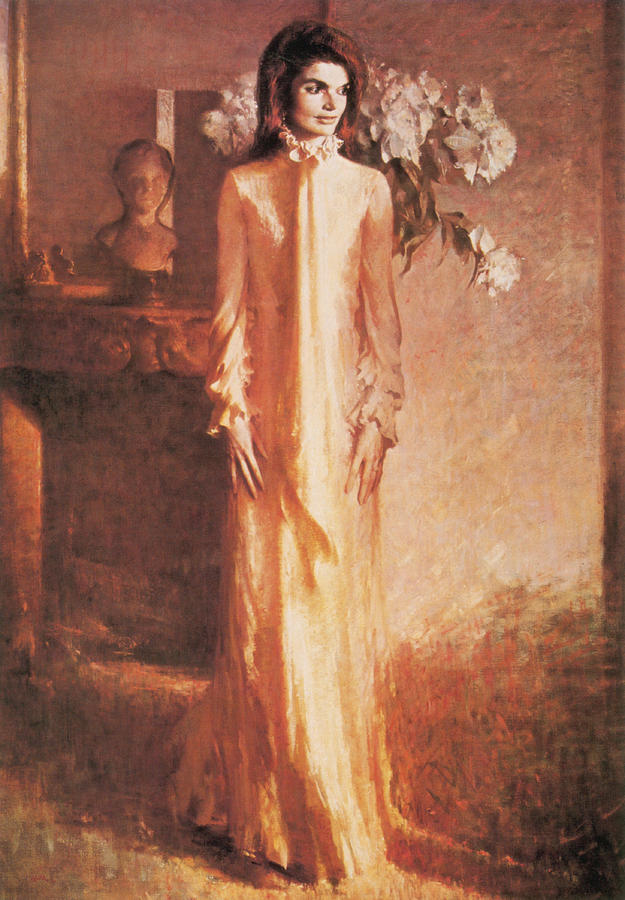 Jacqueline Lee Bouvier Kennedy Onassis (July 28, 1929 - May 19, 1994) was the wife of John F. Kennedy and First Lady of the United States during his presidency from 1961 until his assassination in 1963. In 1952, Jacqueline met Congressman John F. Kennedy. Shortly after, he was elected to the United States Senate and the couple married the following year. They had four children, two of whom died in infancy. As First Lady, Kennedy devoted much of her time to planning social events at the White House and other state properties. She often invited artists, writers, scientists, poets, and musicians to mingle with politicians, diplomats, and statesmen. She also began to let guests at The White House drink cocktails, to give the mansion a more relaxed feeling. The restoration of the White House was Kennedy's first major project as First Lady. She was dismayed during her pre-inauguration tour of the White House to find little of historic significance in the house. The rooms were furnished with undistinguished pieces that she felt lacked a sense of history. she initiated publication of the first White House guidebook, whose sales further funded the restoration; she initiated a Congressional bill establishing that White House furnishings would be the property of the Smithsonian Institution, rather than available to departing ex-presidents to claim as their own; and she wrote personal requests to those who owned pieces of historical interest that might be, and later were, donated to the White House. During her husband's presidency, Jacqueline Kennedy became a symbol of fashion for women worldwide. On November 22, 1963, she was riding with her husband in a motorcade in Dallas, Texas, when he was assassinated. She and her children withdrew from public view after his funeral, and she remarried in 1968 to Greek shipping magnate Aristotle Onasis. In January 1994, Jackie was diagnosed with non-Hodgkin's lymphoma. She died in her sleep in May 1994, two and a half months before her 65t