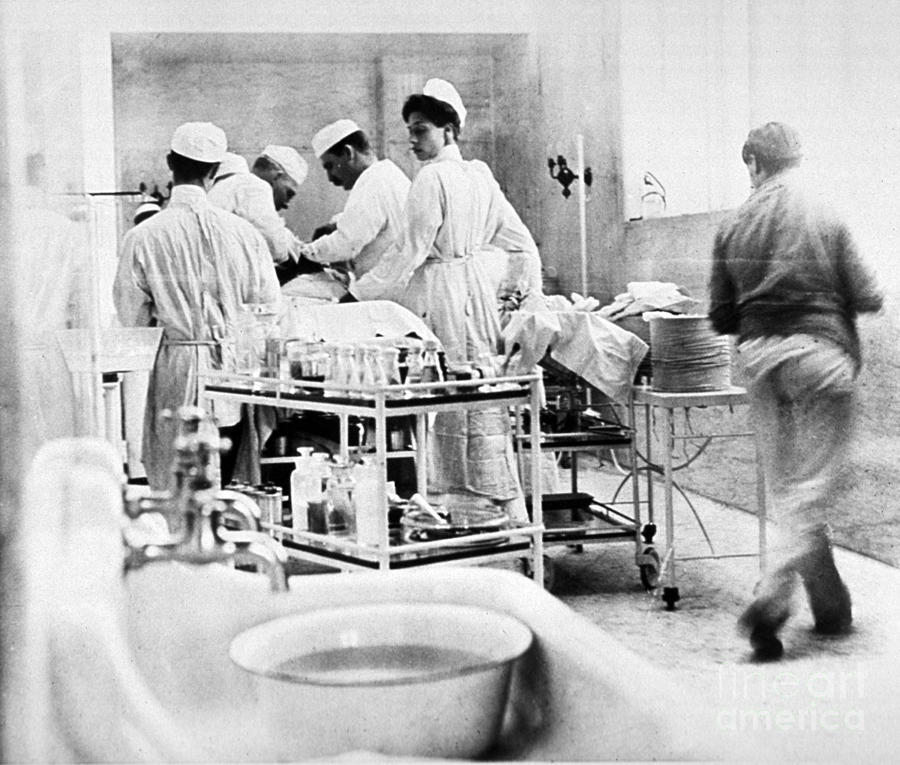 Interior view of operating room; operation by Halsted and Finney is in progress; two members of support staff and cart of supplies are in the foreground. Johns Hopkins hospital album, Baltimore, 1903-1904. William Stewart Halsted (1852-1922) was an American surgeon who emphasized strict aseptic technique during surgical procedures, was an early champion of newly discovered anesthetics, and introduced several new operations, including the radical mastectomy for breast cancer. As house physician at New York Hospital he introduced the hospital chart which tracks the patient's temperature, pulse and respiration. In 1884, Halsted read a report describing the anesthetic power of cocaine when it is instilled into the eye. Halsted became addicted and went to Butler Sanatorium in Rhode Island. where they attempted to cure him by converting his addiction from cocaine to morphine. he remained dependent upon both drugs for the remainder of his life, but was able to function as a physician and surgeon. Halsted was the first chief of the Department of Surgery at Johns Hopkins Hospital when it opened in May 1889. He was appointed surgeon-in-chief in 1890 and became Professor of Surgery in 1892 with the opening of Johns Hopkins University School of Medicine. At Johns Hopkins, Halsted was credited with starting the first formal surgical residency training program in the United States. Halsted was one of the "Big Four" founding professors at Johns Hopkins Hospital. He died on September 7, 1922, 16 days short of his 70th birthday, from bronchopneumonia. No information can be found on the attending surgeon, Finney.