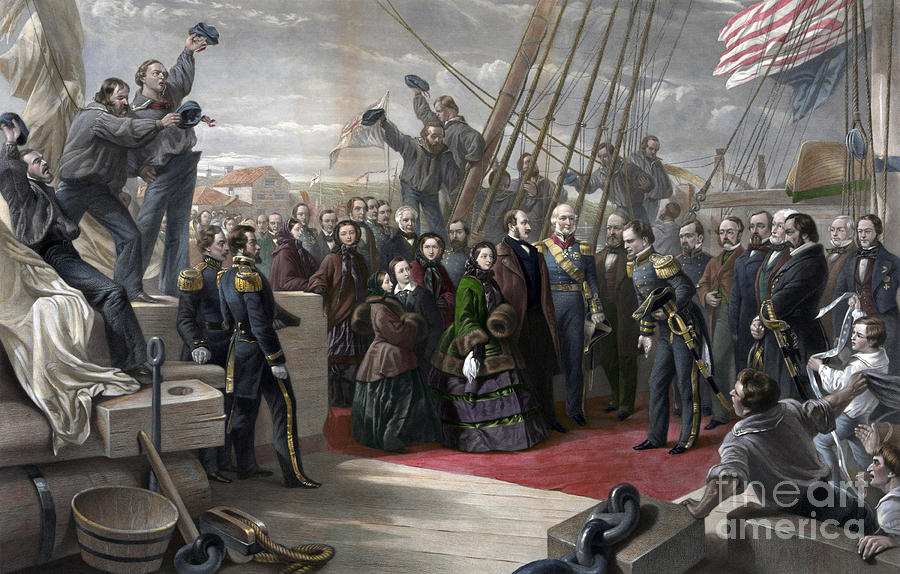 Entitled "England and America. The visit of her majesty Queen Victoria to the Arctic ship Resolute - December 16th, 1856, to whom this engraving is by special permission respectfully dedicated by her obedient servants, P. & D. Colnaghi & Company, painted by W. Simpson ; engraved by G. Zobel." The British lived in the ships during the winter of 1853 and 1854 and in the summer of 1854 abandoned them and camped on Beechey Island before setting sail for England in September of 1854. During the summer of 1855, the Resolute, empty, was found floating by an American, Captain James Buddington, who took her back to his home port of New London, Connecticut. The ship was refitted, at United States government expense in the Brooklyn Naval Yard and given back to England as a token of friendship. Victoria (May 24, 1819 - January 22, 1901) was Queen of the United Kingdom of Great Britain and Ireland. Her reign is known as the Victorian era. It was a period of industrial, cultural, political, scientific, and military change within the United Kingdom, and was marked by a great expansion of the British Empire.