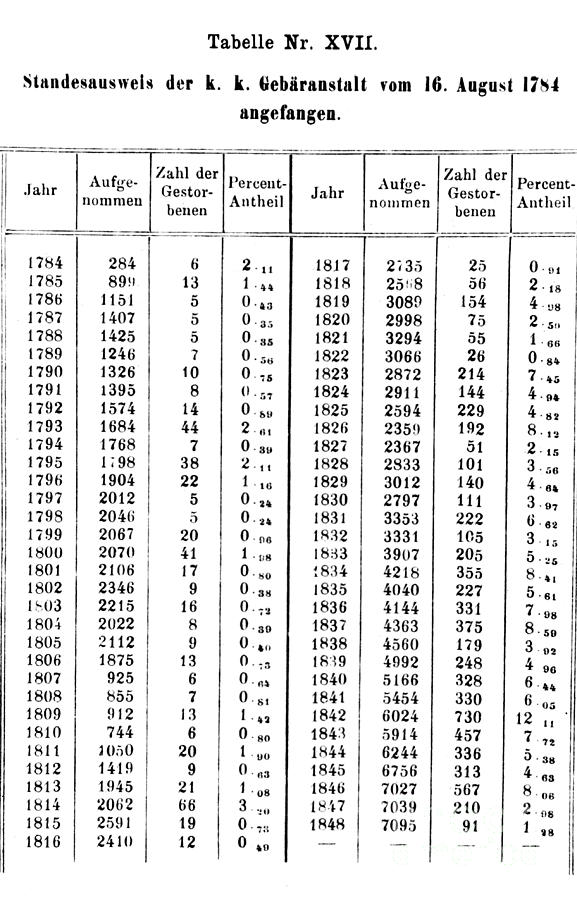 Some of Semmelweis' statistics supporting his theory on the origin of puerpural fever. Ignaz Philipp Semmelweis (1818-1865) was a Hungarian physician now known as an early pioneer of antiseptic procedures. Semmelweis discovered that cases of puerperal fever (childbed fever), a form of septicemia, could be cut drastically if doctors washed their hands in a chlorine solution before gynecological examinations. He postulated the theory in 1847 while working in Vienna General Hospital's First Obstetrical Clinic, where doctors' wards had three times the mortality of midwives' wards. During 1848, Semmelweis widened the scope of his washing protocol to include all instruments coming in contact with patients in labor, and used mortality rate time series to document his success in virtually eliminating puerperal fever from the hospital ward. He published a book of his findings in Etiology, Concept and Prophylaxis of Childbed Fever, but his ideas were rejected by the medical community. Semmelweis's views more favorably received in England than on the continent, but he was more often cited than understood. Beginning from 1861 Semmelweis suffered from various nervous complaints. He suffered from severe depression and became excessively absentminded. In 1865, Semmelweis was committed to an asylum. He was severely beaten by several guards, secured in a straitjacket and confined to a darkened cell. He died after two weeks from a gangrenous wound. The autopsy revealed extensive internal injuries, the cause of death septicemia. He was 47 years old.