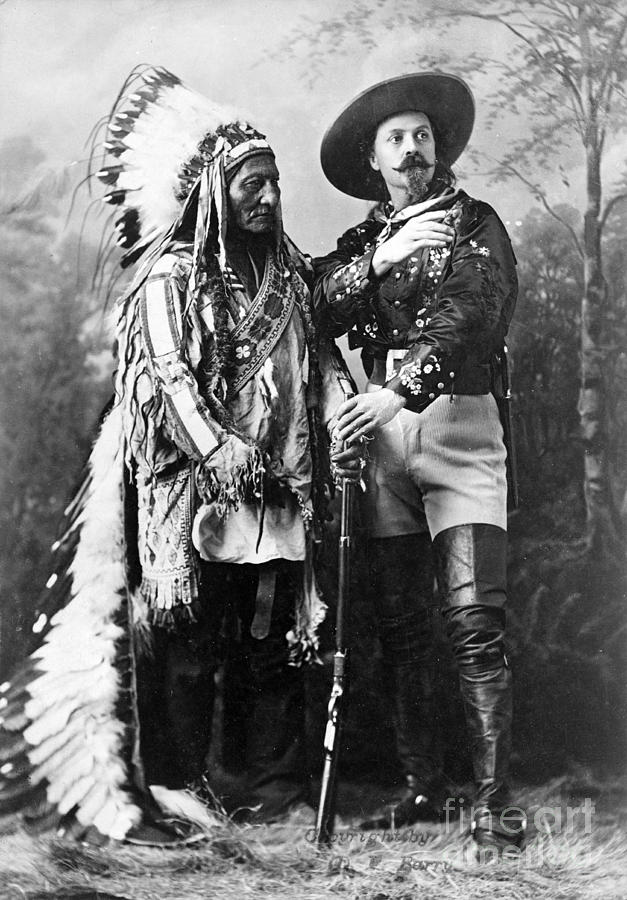 Sitting Bull and Buffalo Bill, taken by William Notman studios, Montreal, Quebec, Canada, during Buffalo Bill's Wild West Show, August 1885. Sitting Bull (1831 - December 15, 1890) was a Hunkpapa Lakota holy man who led his people as a tribal chief during years of resistance to United States government policies. n 1885, Sitting Bull was allowed to leave the reservation to go Wild Westing with Buffalo Bill Cody's Buffalo Bill's Wild West. He earned about $50 a week for riding once around the arena, where he was a popular attraction. He stayed with the show for four months before returning home. During that time, audiences considered him a celebrity and romanticized him as a warrior. He earned a small fortune by charging for his autograph and picture, although he often gave his money away to the homeless and beggars. William Frederick "Buffalo Bill" Cody (February 26, 1846 - January 10, 1917) was an American soldier, bison hunter and showman. One of the most colorful figures of the American Old West, Buffalo Bill became famous for the shows he organized with cowboy themes, which he toured in Great Britain and Europe as well as the United States. During a time when the Bureau of Indian Affairs was intent on promoting Native assimilation, he used his influence with U.S. government officials to secure Native American performers for his Wild West. He treated Native American employees as equals with white cowboys. They received good wages, transportation, housing, abundant food and gifts of clothing and cash from Buffalo Bill at the end of each season. As a frontier scout, Cody respected Native Americans and supported their rights. He called them "the former foe, present friend, the American", and once said, "Every Indian outbreak that I have ever known has resulted from broken promises and broken treaties by the government."