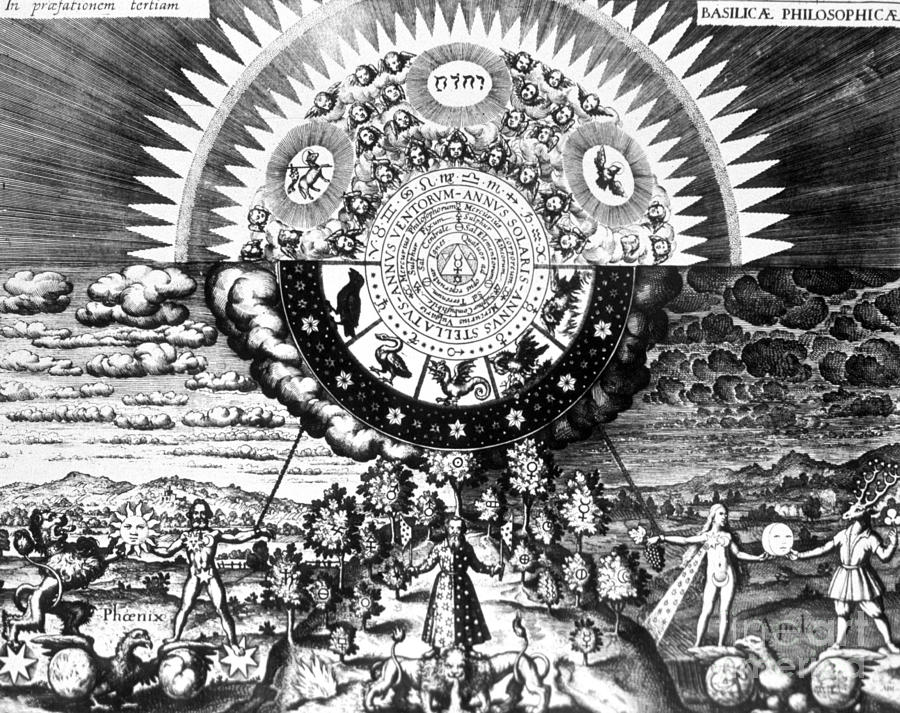 The Emerald Tablet engraving, a powerful mediation for alchemists who claimed it depicted the (S)tone of God leaving Heaven (Tula) and entering Earth. Title page for Daniel Mylius's book The Medical-Chemical Work. At the top is tetragrammaton which symbolizes God the Father. Below Him are the ranks of angels, and below that in the center are the astrological constellations. A major principle here is that there was a profound belief that everything was connected. Below the astrological signs symbols of alchemical transformation the crow, the long-necked goose and the phoenix, a mythical bird that rises from its own ashes. To the right and left of the inner circle or mandala are the contrasting elements that are meant to be brought together especially the dark of the female moon on the right and the light of the male sun on the left. The female moon is depicted as a naked woman standing beside a man with the head of a reindeer. A cluster of grapes, the symbol of the pre-flood nuclear secrets, dangles from the naked woman's hand. Her right breast is a small seven-rayed sun from which stream a shower of stars. She is the core pouring her energies into the river of the Milky Way galaxy (which she straddles) and the Earth. Also known as Luna, the Latin name of the Moon-goddess, she was coupled in Gnostic symbolism and magic texts with Sol, the male sun who stands on the other side of the hill. Together they represent fire and water, whose combination produced the Blood of Life.