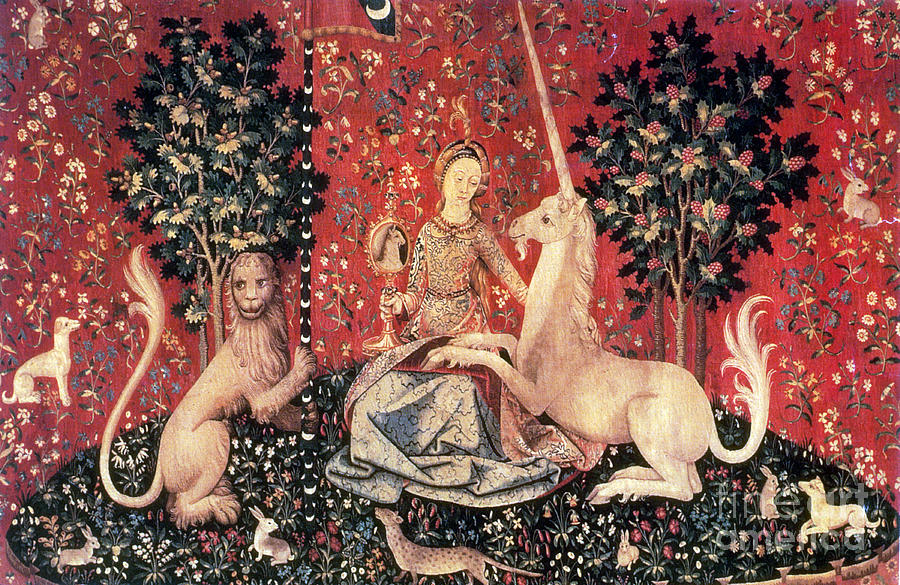 The Lady And The Unicorn, 15th Century

The Lady And The Unicorn, 15th Century

The Lady and the Unicorn is the modern title given to a series of six tapestries woven in Flanders of wool and silk, from designs drawn in Paris in the late fifteenth century and are considered one of the greatest works of art of the Middle Ages in Europe. This one is entitled Sight. The lady is seated, holding a mirror up in her right hand. The unicorn kneels on the ground, with his front legs in the lady's lap, from which he gazes at his reflection in the mirror. The lion on the left holds up a pennant. Unicorns, first mentioned by the ancient Greeks, became the most important imaginary animal of the Middle Ages and Renaissance when it was commonly described as an extremely wild woodland creature, a symbol of purity and grace, which could only be seen and/or captured by a virgin. It has been described in European folklore as resembling a white horse with a large, pointed, spiraling horn projecting from its forehead, and sometimes a goat's beard and cloven hooves. At at other times described as resembling a small horse but with a long, straight horn growing out of its forehead having the legs of a deer and the tail of a lion. In alchemy the unicorn represented the Moon. Many believed that a unicorn's horn had the ability to neutralize poisons. Accounts of unicorns and their magical properties are found in literature, art, and legend.