Blackbeard and Other Swashbuckling Pirates 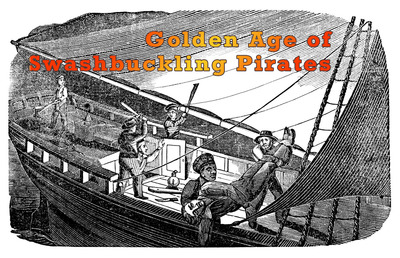 is criminal activity, such as robbery, violence, or kidnapping, on the high seas. Yet, we love pirates.

We dress-up like them, make kid's movies about them, and enjoy cartoons about them.

The history of piracy goes back to 1500 BC from the Phoenicians to the present time.

Early Pirates also include the Vikings who raided many coastal towns and cities.

When most people are talking about pirates, they refer to the golden age of swashbuckling pirates.

In the Caribbean, in the early 17th century, the English took over Tortuga. They invited pirates to attack their enemies, and they did.

Many people are not aware that the U.S. Constitution has a provision for the United States to hire privateers.

Vikings raided cities all along the coastlines for hundreds of years but the most popular and well-known pirates are from about 300 years ago. Think Pirates of the Caribbean.

The Spanish encouraged pirates to attack their enemies. These buccaneers grew so rich they took over the island of Tortuga.

This is the time and place that is heralded in motion pictures and children's books. There was a camaraderie or brotherhood amongst pirates.

By the mid 18th century, this had changed, and many pirate ships ran by enslaving their crews.

To this day, pirates ply the ocean around the world. The romance is gone, though. High powered assault rifles have replaced swords. But, the hunt for treasure and kidnapping remains.

Prints of the Science Source Images collection can now be purchased through Fine Art America!