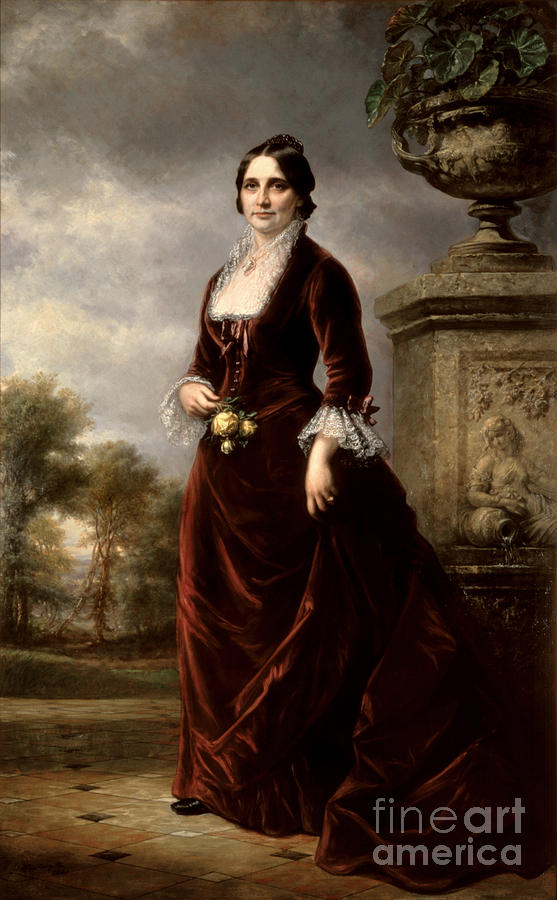 Lucy Ware Webb Hayes (August 28, 1831 - June 25, 1889) was a First Lady of the United States and the wife of President Rutherford B. Hayes. Lucy met Rutherford B. Hayes in 1847. Later that year, she enrolled at Wesleyan Women's College, class of 1850; she was the first first lady to have graduated from college and was a member of Kappa Kappa Gamma sorority. Hayes was by this time practicing law in Cincinnati, and the two began dating seriously. He proposed in June 1851 and they married in1852. A vigorous opponent of slavery, Hayes contributed to her husband's decision to abandon the Whigs for the antislavery Republican Party. During the American Civil War, she visited Hayes often in the field. As First Lady, Hayes brought her zeal to the White House and supported her husband's ban of alcoholic beverages at state functions. The Women's Christian Temperance Union hailed her policy and in gratitude commissioned a full-length portrait of her, which now hangs in the White House. Historians have christened her "Lemonade Lucy" due to her staunch support of the temperance movement; however, contrary to popular belief, she was never referred to by that nickname while living, and it was her husband who banned alcohol from the White House. She also instituted the custom of conducting an Easter egg roll on the White House lawn. The social highlight of the Hayes's years was their 25th wedding anniversary celebration, at which the President and the First Lady repeated their vows at a White House ceremony before many of the same guests who had attended the original nuptials in Cincinnati. She died of a stroke in 1889 at the age of 57. Painting by Daniel Huntington.