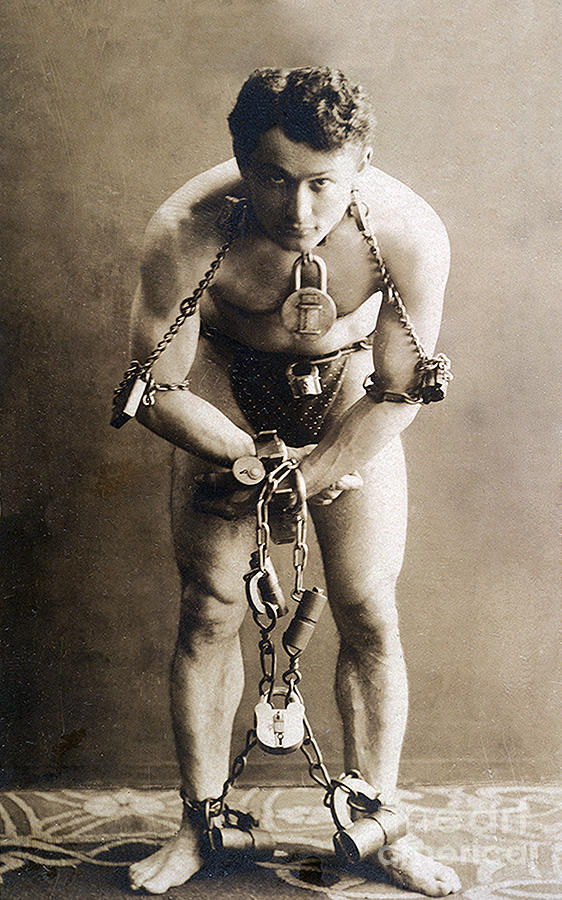 Harry Houdini (March 24, 1874 - October 31, 1926) was a Hungarian-American illusionist and stunt performer, noted for his sensational escape acts. He began his magic career in 1891. He performed in dime museums and sideshows, and even doubled as "The Wild Man" at a circus. He focused initially on traditional card tricks and billed himself as the "King of Cards". He soon began experimenting with escape acts. In 1893, he met a fellow performer, Wilhelmina Beatrice "Bess" Rahner. They married in 1894, and for the rest of his performing career, Bess worked as his stage assistant. He first attracted notice as "Harry Handcuff Houdini" on a tour of Europe, where he challenged police forces to keep him locked up. Soon he extended his repertoire to include chains, ropes slung from skyscrapers, straitjackets under water, and having to hold his breath inside a sealed milk can. He made no secret of the fact that he was an expert on restraints and the skills needed to overcome them but he often concealed the exact details of his escapes to maintain an air of mystery and suspense. Although many of his escapes relied on technical skills such as lock-picking and contortion, he also performed tricks such as Metamorphosis and the Chinese Water Torture Cell, which are essentially classic stage illusions reliant on cleverly designed props. His feats helped to define the basic repertoire of escapology, including escapes from handcuffs, padlocks, straitjackets, mail bags, beer barrels and prison cells. While many suspected that these escapes were faked, Houdini presented himself as the scourge of fake magicians and spiritualists. As President of the Society of American Magicians, he was keen to uphold professional standards and expose fraudulent artists. He was also quick to sue anyone who pirated his escape stunts. Houdini died of peritonitis, secondary to a ruptured appendix at the age of 52.