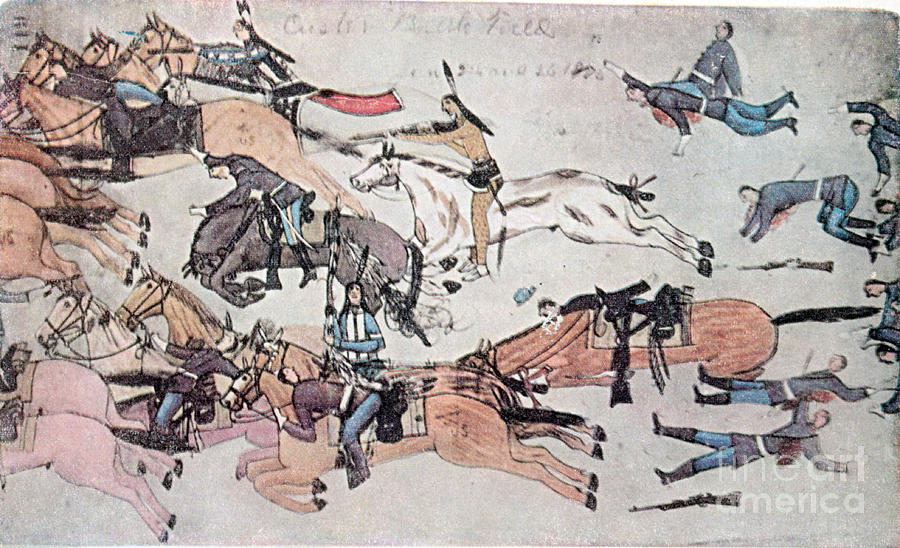 Crazy Horse At The Battle Of The Little

Crazy Horse At The Battle Of The Little

Pictograph by Amos Bad Heart Bull depicts Crazy Horse at the Battle of the Little Bighorn. The drawing was done decades later from stories by tribal elders and it is inaccurate in some respects. Crazy Horse killed American soldiers with his war-club, not his rifle so the depiction of Crazy Horse shooting at full charge is doubtful. Many of the features of Crazy Horse's personal appearance appear correct; one feather, long loose hair, breechcloth, and hail stones painted on his naked, otherwise unadorned body. The Battle of the Little Bighorn was an armed engagement between combined forces of Lakota, Northern Cheyenne and Arapaho people against the 7th Cavalry Regiment of the United States Army. Crazy Horse (1840-1877) was a Native war leader of the Oglala Lakota. He took up arms against the US Federal government to fight against encroachments on the territories and way of life of the Lakota people. After surrendering to US troops under General Crook in 1877, Crazy Horse was fatally wounded by a military guard while allegedly resisting imprisonment at Camp Robinson in Nebraska.