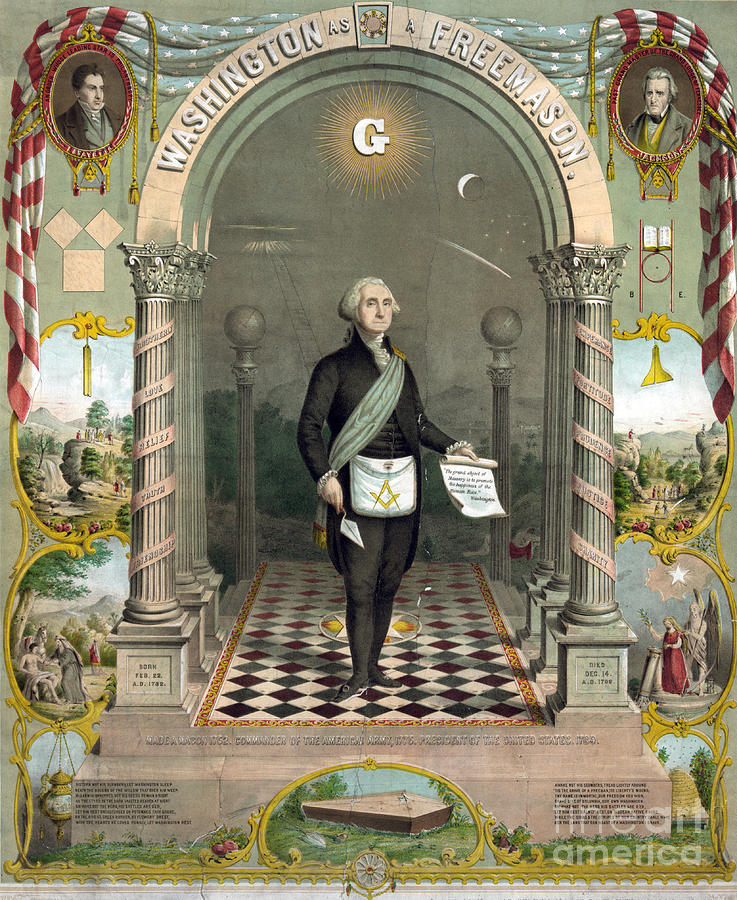 Washington in masonic attire, holding scroll, and trowel. Portraits of Lafayette and Jackson in corners. He joined the Masonic Lodge in Fredericksburg, Virginia at the age of 20 in 1752. At his first inauguration in 1791, President Washington took his oath of office on a Bible from St. John's Lodge in New York. In retirement, Washington became charter Master of the newly chartered Alexandria Lodge No. 22, sat for a portrait in his Masonic regalia, and in death, was buried with Masonic honors. George Washington (February 22, 1732 - December 14, 1799) was the first President of the United States of America, serving from 1789 to 1797, and dominant military and political leader of the United States from 1775 to 1799. He led the American victory over Great Britain in the American Revolutionary War as commander-in-chief of the Continental Army from 1775 to 1783. He was one of the Founding Fathers of the United States. He presided over the convention that drafted the United States Constitution, which replaced the Articles of Confederation and which remains the supreme law of the land. Washington became the first president by unanimous choice, and oversaw the creation of a strong, well-financed national government that maintained neutrality in the wars raging in Europe, suppressed rebellion and won acceptance among Americans of all types. His leadership style established many forms and rituals of government that have been used since, such as using a cabinet system and delivering an inaugural address. He was hailed as "father of his country" even during his lifetime. Washington had a vision of a great and powerful nation that would be built on republican lines using federal power. He sought to use the national government to preserve liberty, improve infrastructure, open the western lands, promote commerce, found a permanent capital, reduce regional tensions and promote a spirit of American nationalism. He died in 1799 at the age of 67. The diagnosis of Washington's final ill