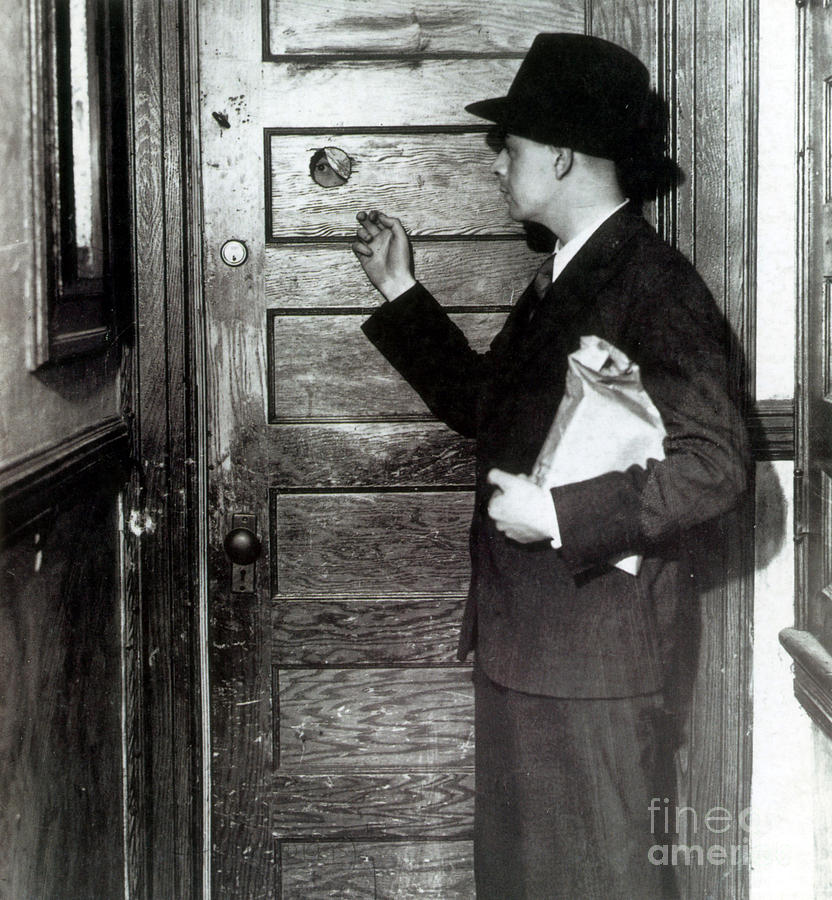 A patron knocks at the door of a speakeasy. Note peephole in the door. A peephole allowed people inside the security of seeing outside without opening the door. Speakeasies were numerous and popular during the Prohibition years. Some of them were operated by people who were part of organized crime. Even though police and agents of the Bureau of Prohibition would often raid them and arrest their owners and patrons, they were so profitable that they continued to flourish. The speakeasy soon become one of the biggest parts of American culture during this time. Prohibition in the United States was a nationwide Constitutional ban on the sale, production, importation, and transportation of alcoholic beverages that remained in place from 1920 to 1933. It was promoted by dry crusaders movement, led by rural Protestants and social Progressives in the Democratic and Republican parties, and was coordinated by the Anti-Saloon League. Prohibition was mandated under the Eighteenth Amendment to the U.S. Constitution. Enabling legislation, known as the Volstead Act, set down the rules for enforcing the ban and defined the types of alcoholic beverages that were prohibited. Private ownership and consumption of alcohol was not made illegal under federal law; however, in many areas local laws were more strict, with some states banning possession outright. Prohibition supporters, called drys, presented it as a victory for public morals and health. Anti-prohibitionists, known as wets, criticized the alcohol ban as an intrusion of mainly rural Protestant ideals on a central aspect of urban, immigrant, and Catholic life. Nationwide Prohibition ended with the ratification of the Twenty-first Amendment, which repealed the Eighteenth Amendment, on December 5, 1933. No location or photographer credited.